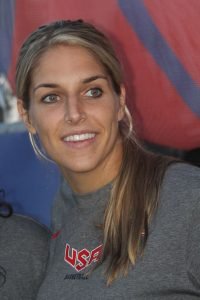 According to the the August issue of Vogue, Elena and Amanda Clifton — with whom Elena played basketball in college and who has previously been referenced only as a friend — are engaged. Furthermore, the Vogue piece is the first known public discussion of Elena being queer, so congratulations are in order for that as well!

“Elena divides her time between traveling with her team, the Chicago Sky, and her family’s home in the rolling green landscape of Wilmington, Delaware,” the Vogue piece states, “She and her fiancee, Amanda Clifton, keep apartments in both Chicago and Wilmington.”

Pride.com reports that Elena was the number 2 WNBA Draft pick in 2013, and the number one placement was taken by Brittney Griner, who is an out lesbian and also part of Team USA in the Olympics this year.

Elena was featured in ESPN’s 2016 Body Issue, where she discussed living with chronic Lyme disease, her family, and how she stays so successful on the court.

Winnie McCroy is the Women on the EDGE Editor, HIV/Health Editor, and Assistant Entertainment Editor for EDGE Media Network, handling all women’s news, HIV health stories and theater reviews throughout the U.S. She has contributed to other publications, including The Village Voice, Gay City News, Chelsea Now and The Advocate, and lives in Brooklyn, New York.

More than a year after the onset of the COVID-19 pandemic, the Wilmington Blue Rocks returned to Judy Johnson Field at Frawley Stadium for their season opener against the Aberdeen IronBirds. Attendance was capped at 25% with face masks and social distancing mandated for spectators. Despite losing to the IronBirds 10-1, the Blue Rocks and […]

On February 3, Frank Mason of the Delaware Blue Coats, the NBA G League affiliate of the Philadelphia 76ers became the 18th player in Delaware franchise history to receive a GATORADE Call-Up to the NBA by signing a two-way contract with the Orlando Magic. He is the fifth NBA G League player to earn a […]

BPG Sports will be hosting a Play-by-Play basketball showcase at the 76ers Fieldhouse for local highschool talent. The event will be featuring some of the top players from Delaware, Pennsylvania and New Jersey. The showcase will be a one-day showdown on January 18th and feature a number of top college prospects. There will be two […]