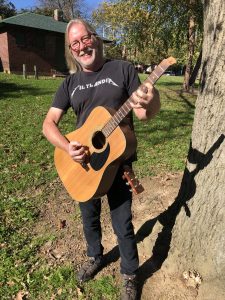 I was a home inspector in the Delaware Valley area and accidently came upon a house on 7th Street on Tilton Park in the Tilton/ Cool Spring Neighborhood Association and bordering Hilltop.  It was next door to the house I was inspecting and the next thing you know, I bought this house. Ha, they made it way too easy but it’s the best move I’ve made!

I love my house but really what makes this place special is the people. Wilmington is a unique place where there are almost no degrees of separation! My neighborhood is quirky and cool with an eclectic bunch of people who are neighbors, but friends.

Wilmington is a small city where you can get involved and make a difference. Moving from Los Angeles to here was crazy because you get to know very few people out there. Here, it doesn’t take long for people to know what the heck you’re up to and know what you said at a city council meeting, or a tavern, or a stoplight. Word gets around fast here!  To an advantage sometimes, and I love the fact that so many people are there for each other.

I’ve always been one to make sure kids eat, have something to do, are safe, etc. Around 10 years ago some of us took it upon ourselves to fix up Tilton Park by cutting bushes back and making it more inviting. This spurred Christian Willauer, a champion for neighborhoods, to kick my butt to be a president of the Friends of Tilton Park that we formed, and advocated for Friends groups for other parks in the city. We’re still advocating to repair the flooding in the playground at Tilton and to find outside and city funds to upgrade the tired playground to something fun for all ages. I also tend to do a lot with West Side Grows, now commandeered by Sarah Lester, with Claire Hamilton being the Community Outreach Coordinator. They are great people and are good friends.

I’ve been involved with the Rodney Community Garden, and I love showing people how to grow things and showing neighbors how food grows at the 7th and West Community Garden. This year there is a program, Harvest2020, through Delaware Center for Horticulture. It’s a program to help get excess produce from community and private gardens to a distribution point in the neighborhoods for people who have a hard time obtaining fresh food.

This is a cool neighborhood with some unique characters! We were sitting on a porch one day and I thought, “This is kind of like the show Portlandia!” – Ha we made a Facebook check in, “Tiltlandia”. It started rolling off the tongues of city council reps. People around town, even Mayor Purzycki calls it Tiltlandia. It’s become an entity that doesn’t even exist but it’s part of the fabric of this area. I love it here. Get to know your neighbors – there is a 98.5 percent chance they are awesome!

A Connecticut transplant, Shannon Jost considers Wilmington her true home. Because of her work with Leadership Delaware and Urban Bike Project, she is this week’s #PeopleOfWilmDE. Read more about her story below. “I am a native of Stamford, Connecticut but consider Delaware my home. I  started as an Admissions Counselor at Ferrum College in Virginia […]

Jaivon Wesley is Director of Operations at The Chase Fieldhouse, General Manager for Phantoms Lacrosse Club, an Adjunct Instructor at Wilmington University, and this week’s #PeopleOfWilmDE! Read his story below: “I have lived and worked in Wilmington for almost three years, but I grew up in Smyrna, Delaware. Before moving to Wilmington and working for […]

Lia Andrews is the founding director of Language University and this week’s #PeopleofWilmDE! She was nominated on Instagram by ItsMeJess151. Read her story below! “At age 11, I moved from one side of Delaware County to another (Glenolden to Garnet Valley, PA). I went from having sidewalks and feeling independent to having no sidewalks and […]